Ann Cole – Plain As The Nose On Your Face – MGM

Cynthia Coleman was born on January 24th or 29th, 1934 in Newark, New Jersey, her father Wallace and her uncles were members of The Coleman Brothers. In 1949, she formed her own singing group, the Colemanaires, with Joe Walker, Sam Walker, and Wesley Johnson, releasing several gospel records in 1953 to 1954 on “Timely” records and “Apollo” records. She released records as Ann Cole on the newly formed “Baton” records until 1958, later recording for “Sir” records, “MGM” records and “Roulette” records. Soon afterwards, she was involved in a serious car accident, which ended her musical career and confined her to a wheelchair for the rest of her life. Ann Cole sadly died in November 1986. This disc from 1960 has a bit of biro on the label, otherwise is in EXCELLENT condition 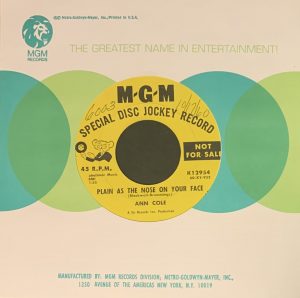