Nick Ashford and Valerie Simpson were a husband and wife song writing/production team and recording duo meeting at Harlem’s White Rock Baptist Church in 1964. After having recorded unsuccessfully as a duo, they joined  the Scepter/Wand label, working with Jo Armstead, where their compositions were recorded by Ronnie Milsap, Maxine Brown, Shirelles and Chuck Jackson. Another of the trio’s songs, “Let’s Go Get Stoned” gave Ray Charles a number one U.S. R&B hit in 1966. That same year, they joined “Motown” records, where they wrote many hit songs, and as recording artists, Simpson subsequently recorded two solo LPs for the label. In 1973, they left Motown after the albums Simpson recorded for the label received poor promotion and the company refused to release an album of the duo recording a collection of their most famous songs for other artists. In 1974, Ashford and Simpson married after resuming their career as a duo with “Warner Bros” records, culminating in their biggest hit “Solid in 1984. Nick Ashford sadly died on August 22nd, 2011. This disc is in EXCELLENT condition, worth checking out the flip “Don’t Fight It” 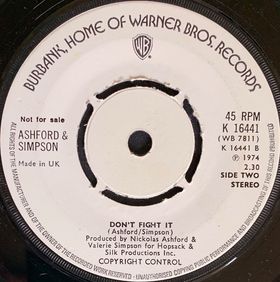 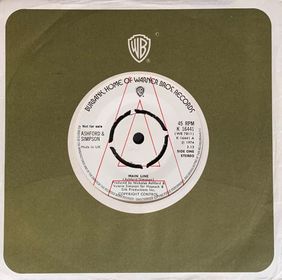