Blue-Eyed Soul singer born in Camden, New Jersey, U.S.A. .Known in Northern soul circles as “The Human Percolator,” blue-eyed soul shouter Billy Harner first emerged in 1964 with backing band the Expressions on the Lawn release “Anymore.” His supporting unit proved short-lived, as the label of his follow-up, “Coney Island Wild Child,” credited Harner alone, and in 1965 he signed to Cameo/Parkway to release “All Through the Night.” After the release of 1966’s “Let’s Get in Line,” Harner moved to the Kama Sutra imprint, where he recorded a series of cult-classic singles including “Homicide Dresser,” “What About the Music,” and the Northern soul favorite “Sally’s Sayin’ Somethin’,” a minor hit that charted in Philadelphia, New York, and Los Angeles in the summer of 1967 but failed to gain national momentum. In late 1968, Harner signed to the local independent label Open/OR, where his debut release, the luminous ballad “A Message to My Baby,” was licensed for wider distribution on Atlantic. Another Northern classic, the scorching Gamble-Huff track “I Struck It Rich” preceded the 1969 release of Harner’s sole LP, She’s Almost You. The album met the same discouraging fate as his previous releases, and after one final effort for the obscure 66 + 6 label, the Chris Kenner cover “Something You Got,” the singer quit his music career to open his own barbershop in Camden, NJ. In the 1990s, Harner resurfaced on the East Coast oldies circuit. This disc has a “drill hole”  and a release date stamp, otherwise is in EXCELLENT condition, worth checking the flip too 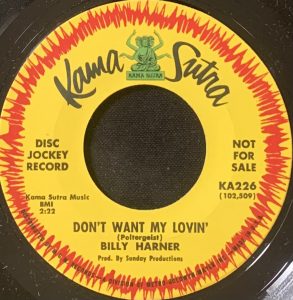 Hi and thanks for dropping by the shop. We won’t be shipping any orders until 25th August as we are doing a stock take on and getting lots of new second hand 45s ready to be loaded on to the website in the Autumn.