Billy McGregor, his two brothers, and Robert Bailey formed “The Antennas”  in 1960 ending up signing with Don Clay’s “Clay” record label. They released “Fuji-yama Mama” / “Be yourself” in late 1962, then signing to Don Clay and Ric Williams’ Boss record label, changing their name to the Squires, backing Perk Lee Moses on his solo record “The Docks” which was also picked up by USA records. At Boss records, Billy McGregor also wrote the track “One Dance” for Ric Lee, which was later recorded by the Creations and by the Classics. The group then moved to Constellation records . Throughout the ’60s Billy McGregor tried to focus on song writing for other artists and n the late 1960s, McGregor wrote a track for Don Clay called “Mrs. Shy” that was intended for Ruby Andrews. Clay liked McGregor’s demo of the song better than Andrews’ performance and had McGregor record the song himself. “Mr. Shy”, released on the Flash label, became a big hit for McGregor in the Midwest. McGregor then began working as a writer for Sunny Sawyer’s Palos label. In the early 1970s, McGregor did some writing for Bill Meeks’ Alteen record label and performed in local Blues bands in the 1980s and 1990s. As well as the stunning “Mr Shy”, also worth checking out the flip “Fall On My Knees”. Disc in EXCELLENT condition!! 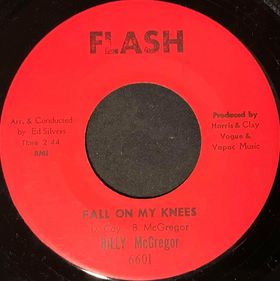