Robert Von “Bobby” Hebb was born on 26th July, 1938 in Nashville, Tennessee. His parents, William and Ovalla Hebb, were both blind musicians. Hebb and older brother, Harold Hebb, performed as a song-and-dance team in Nashville beginning when Bobby was three and Harold was nine. Hebb performed on a TV show hosted by country music record producer Owen Bradley, which earned him a place with Grand Ole Opry star Roy Acuff. In 1960, Bobby Hebb reached the New York City Top 50 with a remake of Roy Acuff’s “Night Train to Memphis”.  “Sunny” was recorded in New York City after demos were made with the record producer Jerry Ross. Released as a single in 1966, “Sunny” reached No. 3 on the R&B charts, No. 2 on the Billboard Hot 100, and No. 12 in the United Kingdom. Bobby Hebb also had lesser hits with his “A Satisfied Mind” in 1966 and “Love Me” in 1967. writing many other songs, including Lou Rawls’ 1971 hit “A Natural Man” This dis is on the
“Original” British label release of this evergreen CLASSIC in EXCELLENT condition. 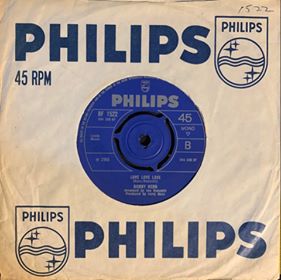