Bobby Wayne – Do I Love You – Grapevine

Wayne Boykin first established himself on the Pittsburgh club scene around the early 60’s as Bobby & the Vanguards. In the late 1960’s, he went across to LA and cut some tracks with Arthur Wright. Two of these were leased by Atlantic and released on 45, credited as Wayne Boykin. Wayne headed back to Pittsburgh and there he joined a group as their lead singer. He remained in the music businessright through the 70’s, ending up in a local group, “Takin’ Names”. Wayne continued to play live gigs until the late 1990’s when he signed to the local “Bonedog” records. Two of his recent recordings were licensed to the U.K. based “Grapevine” records in 2000, the topside being a great reworking of the Northern Soul classic “Do I Love You”, backed with a great slab of Soul “Long Hard Road – This disc is in EXCELLENT condition. Wayne Boykin sadly died in 2012. 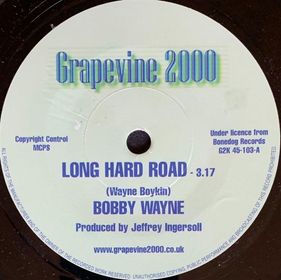