Arley “Buster” Benton was born on July 19th, 1932 in Texarkana, Arkansas. Benton began playing blues and by 1959, he was leading his own band in Chicago. During the 1960s, He recorded for numerous local record labels like “Melloway”, “Alteen”, “Sonic”, and “Twinight”, but because of a lack of opportunities in the early 1960s, he gave up playing professionally for several years and worked as an auto mechanic. Benton joined Willie Dixon’s Blues All-Stars in 1971 and was a fixture in the band for some time. Willie Dixon was credited as the songwriter of Benton’s best-known song, “Spider in My Stew”, released by “Jewel” records, based in Shreveport, Louisiana. It gave Benton some success ,followed by “Money Is the Name of the Game” in 1974
Benton recorded three albums for “Ichiban” records, but  were not commercially successful, followed by a record on “Blue Phoenix” records. Buster Benton sadly died on January 20th, 1996. This disc is in EXCELLENT condition , worth checking out the Bluesy flip 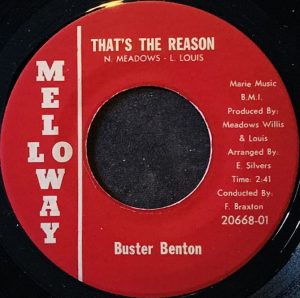