Carlton Earl “Carl” Anderson was born on February 27th, 1945 in Lynchburg, Virginia and was an American singer, film and theatre actor. He moved to Washington D.C. in 1969, where he and some friends formed a group called “The Second Eagle”, with Anderson on vocals. Among the many jazz and rock tunes that the Second Eagle covered were some from the album “Jesus Christ Superstar”, which had been released before there was a plan for a stage production. Anderson played the role of Judas in the pre-Broadway touring company’s production but was passed over for the initial 1971 Broadway production when producers opted for Ben Vereen for the part, and was cast as an understudy, but ended up playing the part in the film, which catapulted Anderson’s career. As a recording artist, Anderson was equally prolific. He signed with “Motown” records in 1972, then “Epic” records in 1983. Carl Anderson sadly died on February 23, 2004, in Los Angeles, just four days before his 59th birthday. Disc is in EXCELLENT condition 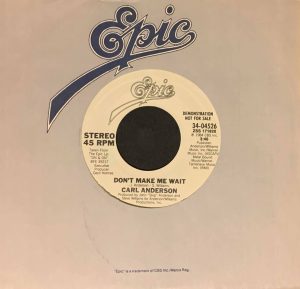