Central Line was an R&B and soul band from London, recording three albums with “Mercury” records in the 1980s and having two hit singles in the U.S. and one Top 40 hit in the U.K. The band was formed in March 1978, and were signed to Mercury Records early in 1979 by John Stainze. The original founding members were Steve Salvari, Camelle Hinds, Lipson Francis and Henry Defoe. Hinds, Francis and Defoe were previously in a band called TFB (Typical Funk Band), which had contained members that would go on to form Light of the World . TFB also contained the drummer Errol Kennedy, who later joined Imagination. Salvari joined TFB after the departure of Kenny Wellington in late 1976, as their second keyboard player and the band members then stood at Salvari, Hinds, Francis, Defoe and Kennedy. The band gigged for about a year then broke up. In early 1978, four of the TFB members got back together, and expanded the previous format by recruiting Linton Beckles and Kim “Jake” Le Mesurier and using the name Central Line. Despite hits with “Walking into Sunshine” and “Nature Boy”, mainstream success eluded them, and they disbanded in August 1984. This disc from 1981 is in EXCELLENT condition 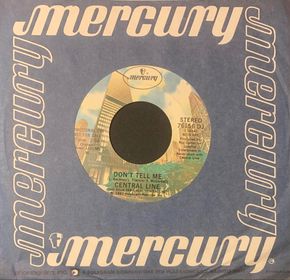