Oscar Douglas Washington was a songwriter, poet, teacher, guitarist, columnist, and music entrepreneur born on February 18th, 1912 in Tulsa, Oklahoma.He wrote 70 songs, but is mostly known for co-writing “Night Train”. As a guitarist, he recorded under the pseudonym Faith Douglas. In his day job, he was a high school chemistry teacher. Douglas also ran the publishing company Soli Music Publishing and founded two labels, “Ballad” Records and “Saintmo”. He died around 2004 in Saint Louis, Missouri. The Ballads, not to be confused with any of the numerous groups of the same name, seemed to have just the one release on “Ballad” records in 1967, and probably came from Missouri. This disc from 1967 has some light wear to the vinyl, whilst still retaining gloss, conservatively graded in VG++ condition – Worth checking out the flip too!! 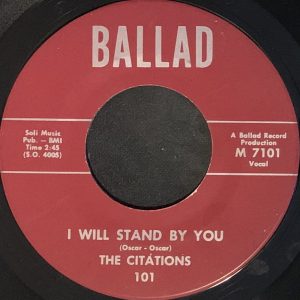