Dan Folger – The Way Of The Crowd – Elf

Dan Folger was born on April 11th, 1943, in San Rafael, California, but spent the majority of his adolescence in Midland, Texas. Dan learnt the piano at an early age, and made friends with Roy Orbison as a teenager, joining him in Nashville, when Roy hit the charts, working for the music publishers Acuff-Rose. Dan also signed a record deal with “Hickory” records, then in 1967 to “Elf” records. Folger left Nashville and eventually the music business in general. Dan Folger  sadly died on May 23rd, 2006, in Bentonville, Arkansas. The vinyl on this classy 1967 disc is in EXCELLENT condition, but there is a “drill hole” and some staining and discolouration to the label. 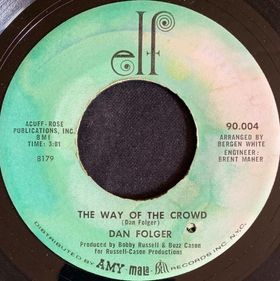