Danny Toeman – She’s Got Something About Her – LRK

For the first time ever on vinyl! Championed by Craig Charles on BBC 6 Music and Robert Elms on BBC London Radio, ‘She’s Got Something About Her’ is the debut single of North London Soul Man Danny Toeman, now making its debut the way nature intended it to be; on Wax! b/w ‘Give It All Up (Mr. Showtime)’.

“It’s dripping in Stax soul and Daptones sweat, yet alive with a certain contemporary afterglow – all thanks to Toeman’s vocal delivery. Wrapped in a young passion […] fiery on the inside; gritty on the edges; sweet on the falsetto.” – SoulTracks

“With the delicate smoothness of buttery sixties soul, his new single oozes the vintage charisma of Motown-like melodic honey. With an easygoing instrumentation of an alluring rhythm and sunny guitars setting the mood, it’s his fiery vocal chops with a bit of raw grit and the addition of rousing horns which truly set this vitalizing groove apart and make it sound like a timeless slice of sweet soul.”- Jansen’s Jamz

When thinking about the true legends of Funk and Soul, a certain archetype and era springs to mind. Inspired by the greats, but forging his own path into unchartered territory, Danny Toeman forces music fans to rethink what it means to be a ‘Soul Man’. 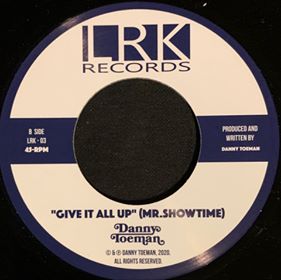