Delloreese Patricia Early was born on July 6th, 1931, in Detroit, Michigan. In 1953, she signed a recording contract with “Jubilee” records, where she released some albums and 45’s. In 1959, Reese moved to “RCA” records, recording regularly throughout the 1960s, releasing singles and several albums. . In 1969, Reese began a transition into acting work, which would eventually lead to her highest profile, and also signed with “Avco” records in 1970 and continued to act and record through the decades. Reese sadly died at her home in Los Angeles on November 19th, 2017. This disc from 1962 has light scuffs to the vinyl, conservatively graded between VG+ and VG++ condition 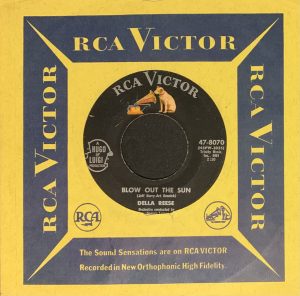 Reese’s mother, Nellie Mitchelle Early, died in 1949 of an intracerebral hemorrhage. Reese’s father, Richard Early, died ten years later. Reese had an adoptive daughter from a family member unable to care for her, named Delorese Daniels Owens, in 1961. Owens died on March 14, 2002. She died from complications stemming from pituitary disease. Reese said of the experience, sharing her frustration with the lack of awareness and knowledge of pituitary disorders:

When it happened, I thought, “It’s such an odd thing to die from,” because pituitary problems aren’t something you hear about. It makes it harder because you don’t understand what happened. It seemed so strange and hard to explain. It still is, to be honest.[17]

In 1952, Reese married factory worker Vermont Adolphus Bon Taliaferro, nineteen years her senior.[18] She adopted the stage name Pat Ferro[19] for a week, before introducing the stage name she used for the rest of her life—though sources differ as to whether this name change was after the failure of the marriage,[18] or simply a show-business decision.[20] A second marriage ceremony, on December 28, 1959, to accountant Leroy Basil Gray, who had two children by a previous marriage, was kept secret for some time.[21] This marriage either ended in divorce[22] or was annulled on the basis that Gray’s previous divorce was invalid.[18] In 1961, Reese was briefly married to bandleader Mercer Ellington (who was then her manager), before their union was annulled later that year due to Ellington’s Mexican divorce from his wife Evelyn Walker being ruled invalid.[18] In 1983, she married Franklin Thomas Lett, Jr., a concert producer and writer.[citation needed]

In the 1980s, Reese was ordained a minister through the Christian New Thought branch known as Unity after serving as the senior minister and founder of her own church, Understanding Principles for Better Living.[23] The “Up Church” is under Universal Foundation for Better Living, a denomination of Christian New Thought founded by Rev. Johnnie Colemon, a close friend of Rev. Reese-Lett.[24] In her ministerial work, she was known as the Rev. Dr. Della Reese Lett.[25]

In 1979, during taping for a guest spot on The Tonight Show, Reese suffered a near-fatal brain aneurysm, but made a full recovery after two surgeries by neurosurgeon Charles Drake at University Hospital in London, Ontario.[26] In 2016, shortly after her 85th birthday, Reese was said to be in poor health, and had undergone multiple surgeries. She stated that she had neglected her health for years, which had contributed to her developing type 2 diabetes.[27] After her last appearance in Signed, Sealed, Delivered, she retired from acting. While Reese sometimes used a wheelchair, she avoided using one often, out of concern it would make her condition worse.[28]

On June 25, 2019, The New York Times Magazine listed Reese among hundreds of artists whose material was reportedly destroyed in the 2008 Universal Studios fire.[31]