The Dynamic Sounds Orchestra were a nine piece ensemble who would later become the backing and touring band for one of the windy city’s most famous soul groups, The Chi-Lites.

The original origins of the DSO had begun earlier in the mid 60’s when teenage bass player Norwood Gray Jr along with fellow guitarist Anthony Barnes held performances using several different drummers as a three piece combo under the name of The Dynamic Sounds. Norwood was the eldest son of female vocalist, Lil Gray who during the mid 60’s recorded three 45 releases “Are You Fooling” (101) , “Out Of Nowhere” (102) and “One Day Your Gonna Get Burned (103) for Ulysses Samuel Warren’s Jerma records label. Norwood himself would also later play bass on U.S. Warren’s collectable funk album “For A Few Funky Dues More” which appeared on Warrens other label logo Chytowns (2001).

During 1970 Norwood was invited to play on a session that also featured a brass section that included Charles ‘Butch’ Carter (Trombone), Milton Thomas (Soprano and Tenor Saxophone), Louis Minter (Alto Saxophone) and the late Kevin Thompson (Trumpet). It was from this chance meeting that the concept of the Dynamic Sounds Orchestra was born. Further musicians were added to the line-up, Clifford Conley (Guitar), Ronald Scott (Keyboards), Dennis Howell (Drums) and finally Otis Gould (Conga Drums and Percussion). With the now retired (from her own performing career) Lil Gray assuming the role of the group’s manager.

From early 1972 till 1978 several different permutations of the DSO (at one point containing 13 members) supported the vocal talents of Chi-Lites, Marshall Thompson, Robert ‘Squirrel’ Lester, Creadel ‘Red’ Jones and Eugene Record, as well as later additional members along the Chi-Lites meteoric rise to world stardom. When Eugene Record left to pursue a solo career in 1976, some of the members of the DSO also followed him to Warner Brothers and are featured on the three albums that he recorded there. Eugene also produced an album for former ‘Lost Generation member Lorrell Simon entitled “Mellow, Mellow, Right On” again with musical accompaniment provided by some members of the DSO.

When Eugene Record later returned to the Chi-Lites line up he again called on some of the former members of the DSO to provide the orchestration on the 1982 Chi-Sound album project “Me And You” which featured the popular 12”/7”single release “Hot On A Thing (Called Love)”, a US R&B number 15 chart entry.

Back in 1976 the DSO using some of their earnings from their time with the Chi-Lites embarked upon an album project of their own although they never quite finished the project, also due in part to a later house fire which destroyed their master tapes. The band later disbanded in 1978, but still remained in contact while following their, own careers and lives. Fortunately for us, a later discovery of a cassette tape of the unfinished DSO sessions by Otis Gould would lead to the groups lost masters eventually being heard by a wider audience. Otis painstakingly set about re- mastering the tracks, which he eventually released via several internet based outlets.

Through one of Soul Junction’s Chicago A&R contacts, this project was brought to our attention and two subsequent DSO tracks have been licensed, so before you, you have the uplifting dance track “Take Me Back” backed with the excellent sweet soul ballad “All I Wanna Do Is Love You” both finally gaining a vinyl release (SJ1000), its intended format at the time of its conception.

To this day all the members of the DSO have remained in contact with the exception of their trumpet player Kevin Thompson. Kevin lost his life during a house fire at his Chicago home, initially safely exiting the building he was then severely injured when he re-entered the building to save his beloved instruments, later dying from his injuries. His spirit is sorely missed. Kevin was also the lead vocalist on “Take Me Back”.

Both Clifford Conley and Dennis Howell relocated to the West Coast. Dennis did eventually return to his native Chicago where he still occasionally plays with The Chi-Lites. Clifford currently resides in Altadena. CA. where he still plays within a band at his local church.

Percussionist Otis Gould following the breakup of the DSO moved south to Atlanta, GA, to pursue a career in Education. Now a retired school administer he has just recently completed a two year tour with the Broadway show ‘Ain’t Misbehavin’. Otis is also the driving force behind the reclamation of the DSO’s previously unissued material.

Trombonist Charles Carter still resides in Chicago where he still plays with an Earth, Wind and Fire tribute act by the name of ‘Shinning Star’.

Alto-Saxophonist Louis Minter too still lives and works in the Windy City as a car salesman, he too continues to perform, some of his performances at the ‘Apostolic Church Of God’ can be found on You Tube.

The final member of DSO’s brass section Tenor and Soprano Saxophonist, Milton Thomas now resides in Ypsilanti, MI. Although now suffering from a deterioration in his hearing. He still continues to play in between his day job in the construction industry.

Keyboardist Ronald Scott later became an ordained minister at The Beyond The Veil Ministries. He is also an undertaker for Scott Funeral Services and continues to write and play around Chicago.

The final surviving group member, bass player Norwood Gray Jr still lives with his family in Chicago. In 1980 Norwood graduated with a degree in electrical engineering which allowed him to enjoy a long and successful career with HP Computers, from whom he is now retired. Sadly his mother Lil Gray passed away in 2000 due to heart failure. 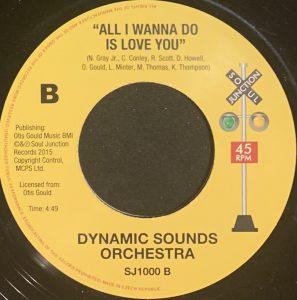