Elbowed Out were a mixed race group of musicians out of the west coast town of Seattle in the state of Washington. The group’s founding members were lead vocalist Sam Chambliss who also played trumpet. Lead Guitarist Denis Wilcox who also shared lead vocals. Drummer, Clarence Acox, Keyboard player Gaylord Young and a horn section that featured Ray Baldwin, Jabril Radhid and Nick Ceasar. They had all met while studying music at the University of Wasington. Sadly both Gaylord Young and Nick Ceasar are now deceased. Elbowed-Out became regular performers at local area junior high and high school gigs, their repertoire included cover versions of songs made famous by the Blackbyrds, Crusaders and Herbie Hancock amongst others. They eventually graduated on the Seattle club scene, where they featured as the support act for the likes of James Brown, The O’Jays and Tower Of Power. Elbowed-Out later went out on the road securing touring dates across Canada. A connection was made which led to the band performing in the Pacific islands of Singapore, Indonesia and Japan. But after a period of circa Twenty year’s together they eventually disbanded and all went their separate ways. Their lasting legacy is the two previously unissued dance tracks that Soul Junction now present to you. The upbeat “Taking A Step” b/w “Girl You Got Magic” both recorded in 1978 and both featuring Sam Chambliss on Lead vocals. The group’s mission in life was “to get you up and out of your seat, and then to begin to move your feet” and we think you’ll agree both sides of this 45 does exactly just that. 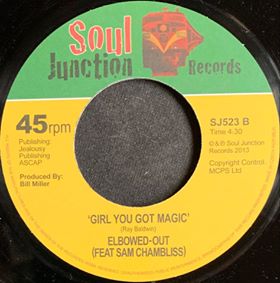