Emporers Soul 69 – Bring Out Yourself – Futura

The Emporers were from Harrisburg, Pennsylvania, and comprised Bobby Fulton, David Peterson, Donald Brantley, Edgar Moore, Jim Jackson, Milton Brown and Tyrone Moss. They released  four singles between 1966 and 1967. This reformed version of the group, utilised some of the original line up and recorded this one track at Baldwin Sound Productions, Mechanicsburg, PA, June 19th, 1969, 8pm to 12.30am with 4 track 15 speed tape. This is a rerelease of a rare Funk track originally released on “Futura” records in 1969. This disc is in EXCELLENT condition!! 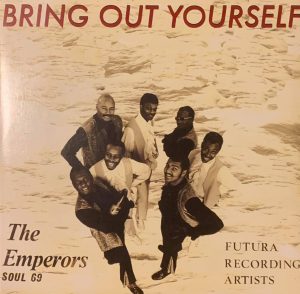 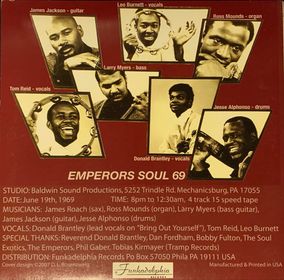