Gertrude Evelyn Freeman was born on February 13th, 1919 in Cleveland, Ohio. After an early career as a swing band and gospel choir leader, she and her husband Tommy Roberts established the Young Saints foundation for young performers in Los Angeles. In 1938, she formed The Evelyn Freeman Swing Band, then in the late 1950s, she reformed the Evelyn Freeman Orchestra releasing a “rock and roll” single credited to Evelyn Freeman and The Exciting Voices on “Dot” records in 1958. This was followed by an album on “Imperial” records in 1960. In 1962 “Didn’t It Rain” was released on “Bel Canto” records, then reissued on “United Artists” records. In the 1960’s, she moved to Los Angeles. She continued to work as a composer and arranger for television and for performers like Bing Crosby, Dean Martin and Louis Prima. She also established The Young Saints Scholarships Foundation, a nonprofit organization incorporated in 1967, with the aim of providing free training in singing, dance, drama, television work and associated skills for young people, aged between 5 and 21, in South Central Los Angeles. Evelyn sadly died on May 5th, 2017. This disc has some light, superficial wear, whilst still retaining gloss, conservatively graded in VG++ condition, worth checking out the flip too!! 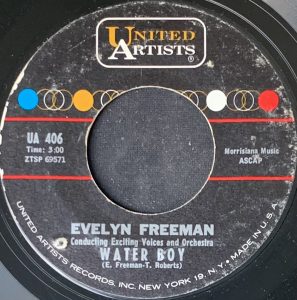 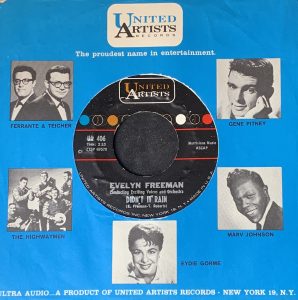