The Fantastic Four formed in 1965, comprising “Sweet” James Epps, brothers Ralph and Joseph Pruitt, and Wallace “Toby” Childs, When Childs and Ralph Pruitt left, they were replaced by Cleveland Horne and Ernest Newsome. Their first release on “Ric Tic” records “The Whole World Is A Stage”  peaked at number 6 on the U.S. “Billboard” R & B chart in 1967, with the next release, “You Gave Me Something (And Everything’s Alright),” reaching number 12 that same year. Motown purchased Ric-Tic, and they had another Top 20 R&B hit with “I Love You Madly,” in 1968. They continued to record for Motown, releasing several singles under its Soul subsidiary label, until 1970, when they went into semi-retirement. Some years later they signed to Armen Boladian’s “Westbound” records, where they had some  success. The Fantastic Four remained active through the decades. Cleveland Horne sadly died on April 13, 2000 and “Sweet James” Epps sadly died on September 11, 2000. His death spelt the end of The Fantastic Four. This disc from 1968 has a “drill hole” otherwise in EXCELLENT condition – Check out the flip “I Feel Like I’m Falling In Love Again” 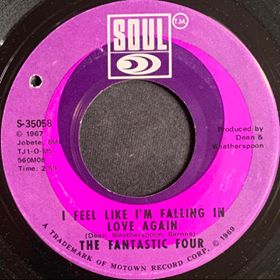 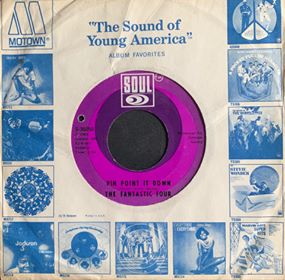