Flamingos – Lover Come Back To Me – Polydor

Jacob (Jake) Carey and Ezekial (Zeke) Carey formed The Flamingos in Chicago, Ill after meeting cousins Paul Wilson and John. Earl Lewis soon joined, and after a series of name changes they became The Flamingos. Sollie McElroy soon replaced Lewis and their first single for “Chance” records was a moderate local success, as was the follow-up. The Flamingos left Chance Records in December 1953 and signed with “Parrot” records. Sollie McElroy left the group in December 1954, to be replaced by Nate Nelson. In 1955, they signed with “Chess” records with new member Tommy Hunt and Terry (Buzzy) Johnson moving on to “Decca” records the “End” records. Tommy Hunt left for a solo career in 1960. Nate Nelson and Terry Johnson split to form The Modern Flamingos in 1961, and went on to record as The Starglows on “Atco” records in 1963. After many line up changes, they recorded several songs through the 1960s, peaking at number 26 in the UK charts with “The Boogaloo Party”. They formed their own label, Ronze, and produced many of their own recordings. The group continued recording into the 1970s. The group split up in late 2005 due to money disputes. This disc from 1970 is a FABULOUS reworking of their earlier hit and is in EXCELLENT condition. 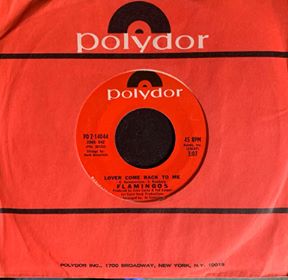