Flirtations – Nothing But A Heartache – Deram

Lestine Johnson and sisters Ernestine Pearce, Shirley Pearce and Betty Pearce (from South Carolina) formed the Gypsies in New York in 1962, signing to “Old Town” records in 1964, where they released 4 records before signing to “Josie” records in 1966, renaming themselves The Flirtations, then moving to the Jamie – Guyden distributed “Festival” records. Betty Pearce left the group, reducing the Flirtations to a trio, and in 1968 moved to England, where they signed to “Parrot” records, supporting the label’s star act, Tom Jones on his European tour. After releasing 1 record on the label, they signed for “Deram” records, where they enjoyed success, releasing 6 singles until 1971. Throughout the 1970s the Flirtations released material on various labels, and have recorded sporadically through the decades. This disc has superficial scuffs, whilst retaining gloss, conservatively graded between VG+ and VG++ condition, worth checking out the flip too! 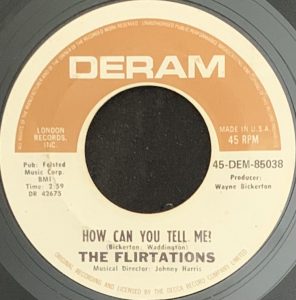