Four Tops – Is There Anything That I Can Do – Tamla Motown

Formed in 1953 in Detroit, comprising Lawrence Payton, Levi Stubbs, Renaldo “Obie” Benson and Abdul “Duke” Fakir , initially as The Four Aims. The four founding members remained together for over four decades, until 1997 without a single change in personnel.
In the 1960’s they were the main male vocal group for the songwriting and production team of Holland, Dozier, Holland. After  Holland, Dozier, Holland left Motown in 1967, the Four Tops were assigned to a number of producers, primarily Frank Wilson. When Motown left Detroit in 1972 to move to Los Angeles, California, the Tops stayed in Detroit and moved over to “ABC” records, where they continued to have charting singles into the late 1970s. Since the 1980s, the Four Tops have recorded for, at various times, “Motown” records, “Casablanca” records” and “Arista” records. This tune never came out on a 7″ in either the U.S. or U.K.!!!! This disc has some superficial scuffs to vinyl, whilst still retaining lots of gloss, and the sleeve has some wear to the reverse with a bit of writing Conservatively graded in VG++ condition – Worth checking out!! 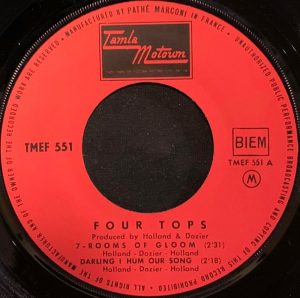 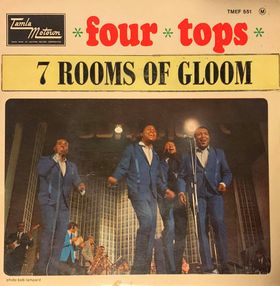 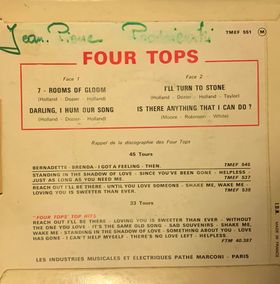