Not to be confused with Fred Hughes, who recorded for Chicago’s “Vee Jay” and “Brunswick” records, Fred Willie Hughes Jr. was born on August 20th, 1943 in Berkeley, California. In his early years Freddie played in quite a few groups including the Holidays, Five Disciples, The Markeets, Casanova Two, Music City Soul Brothers and The Four Rivers. In 1968 he recorded  “Send My Baby Back” which was released nationally by San Francisco’s “Wee” records and internationally by “Wand” records, followed by a couple more releases. In addition Freddie Hughes has been working with such greats as Aretha Franklin, James Brown, Etta James, Ike & Tina Turner and has performed in San Francisco, New York as well as London, France, Italy, Switzerland and Holland. This disc from 1968 has some wear and is conservatively graded in VG+ condition, worth checking the flip too!! 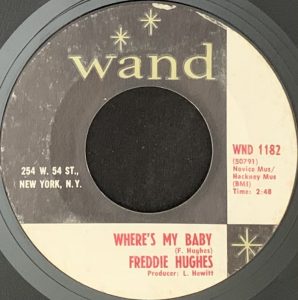