Jerry Butler Jr.
Jerry Butler was born on December 8th, 1939 in Sunflower, Mississippi and was the brother of Billy Butler. Active from 1958 in the music business, he was a former member of The Impressions, long time associate of Curtis Mayfield, has duetted with Betty Everett, Brenda Lee Eager, Thelma Houston and Gene Chandler, he was a vocalist in his own right and was also an American politician, serving as Commissioner for Cook County, Illinois, from 1985 until 2018. Gene Chandler was born in 1937 in Chicago, Illinois. After a stint with The Dukays he went solo, releasing the smash hit “The Duke Of Earl” in 1961. After his solo releases at Vee Jay Records he started recording for Constellation Records, Checker and Brunswick. He duetted with Barbara Acklin on “From The Teacher To The Preacher” along with covers of James Brown, “There Was A Time” and “You Threw A Lucky Punch”, an answer song to Mary Wells’ “You Beat Me To The Punch”. In the early 70’s he dueted with Jerry Butler and had his second biggest hit after “The Duke Of Earl” with “Groovy Situation”. In the early 1970s, whilst at Mercury, he set up his Mister Chand label, one of many he was involved with over his long career. Between 1978 – 1981 he became executive vice president at Chi Sound Records, where he had hits with hits “Get Down”, “When You’re number 1”, “Does She Have A Friend?” and “Rainbow ’80” and continued to record. This disc from 1970 combines the vocal skills of these two heavyweight artists, and is in EXCELLENT condition, worth checking out the flip too!! 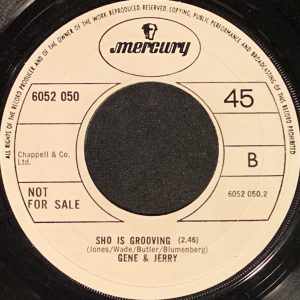