Gene Chandler – Let Me Make Love To You – 20th Century

Born in 1937 in Chicago, Illinois. After a stint with The Dukays he went solo, releasing the smash hit “The Duke Of Earl” in 1961. After his solo releases at Vee Jay Records he started recording for Constellation Records, Checker and Brunswick. He dueted with Barbara Acklin on “From The Teacher To The Preacher” along with covers of James Brown, “There Was A Time” and “You Threw A Lucky Punch”, an answer song to Mary Wells’ “You Beat Me To The Punch”. In the early 70’s he dueted with Jerry Butler and had his second biggest hit after “The Duke Of Earl” with “Groovy Situation”. In the early 1970s, whilst at Mercury, he set up his Mister Chand label, one of many he was involved with over his long career. Between 1978 – 1981 he became executive vice president at Chi Sound Records, where he had hits with hits “Get Down”, “When You’re  number 1”, “Does She Have A Friend?” and “Rainbow ’80” and continued to record. This classy disc from 1980 has a tiny bit of label damage and ring wear, otherwise is in EXCELLENT condition 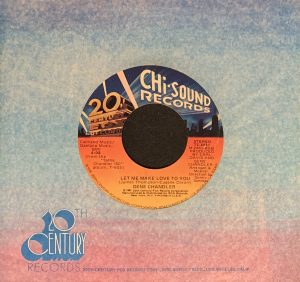