Legendary songwriting siblings Richard and Robert Poindexter often during the 1960’s frequented the CBS Building at 1697 Broadway and 53rd St (formerly known as the Ed Sullivan Building). On several of their visits they noticed a young man by the name of James “B.J.” Barnes, using one of the building’s many rehearsal rooms. Eventually the Poindexter’s invited B.J’ to partake in one of their open rehearsals. Asked to give their honest opinion regarding his voice, although they both liked him the brothers felt he didn’t have a strong enough voice to be a solo performer and recommended that he join or became a group. The very next day B.J returned with two other singers by the names of Randy and Tony, again the Poindexter’s liked what they heard but felt potentially this new ensemble still needed a fourth member, this situation was rectified with the addition of Douglas “Smokey” Scott the groups eventually lead singer.

An initial recording session for this as yet un- named group lead to the recording of three unrehearsed songs “Give A Damn”, “Push Button Love” and “Beautiful Philosophy (Of Love)” with Robert Poindexter’s wife Jackie Members contributing to the songwriting credits. With the group taking the name of ‘The Internationals’ they released their first single on the D’ar Recording Company label during 1969 “Give A Damn/Push Button Love” (D’ar 102) followed later in the same year with their second release “Too Sweet To Be Lonely/Beautiful Philosophy” (D’ar 105). The lead track for this second 45 release a further Poindexter’s composition which had been previously recorded on The O’Jay’s as part of their 1968 Bell records “Back To The Top” album project and also by a songwriting colleague of the Poindexter’s Ray Lewis (D’ar 101). The D’ar label was owned by Jeff Moore and a silent partner, with Moore overseeing the day to day running of the company. The Internationals later broke up with Randy and Tony leaving the group, leaving “B.J.” and “Smokey”, who with the addition of Charles Stodghill and with Richard Poindexter briefly filling in as a vocalist, became the hit group The Persuaders.

Richard Poindexter although a reluctant singer, did sing on both sides of The Persuaders 1971 million seller “Thin Line Between Love &Hate/Thigh Spy” as well as a third song “You Musta Put Something In Your Love” before returning to his preferred position as a songwriter/producer upon the arrival of a later new group member Willie Holland. Holland’s vocals would then on feature on the remaining tracks from the groups 1972 “Thin Line Between Love & Hate” (Win Or Lose Productions) album. Today The Internationals second 45 is a highly regarded and sort after example of the genre of Soul known as ‘Crossover’. 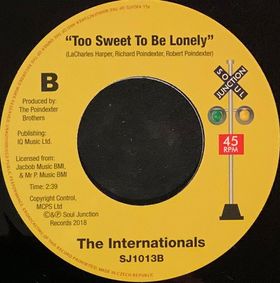 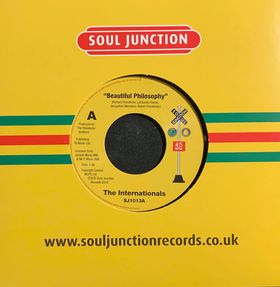