James Ray Raymond moved from Washington, D.C. to New York City in 1959, at the age of 18  recording  a single for “Gallant” records as Little Jimmy Ray , two years later he signed to “Caprice” records, where he  recorded a few records, initially selling well, before moving to “Dynamic Sounds” records and then “Congress” records, before sadly dying in the mid 1960’s whilst still relatively young. Although not hugely successful in his own right, he influenced many other artists, with his songs “If You Gotta Make A Fool Of Somebody”, “I Got My Mind Set On You” and “Itty Bitty Pices” all covered by major artists to great success. This disc has some superficial label wear on the top side, but the vinyl is in EXCELLENT condition!! Worth checking out the flip!! 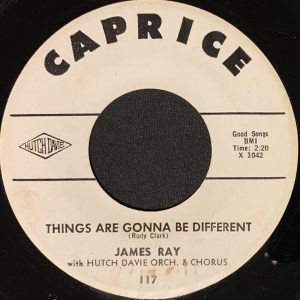