Johnny Talbot was born in Texas and raised in Oakland, California. He played guitar in the Bay area bar and went on to become the front man for De Thangs earning him the nickname: “The Father of Oakland Funk”.  He released a couple of 45’s on “Red Fire” records and “In” records in the mid 1960’s. This disc from 1964 has some light wear, conservatively graded in VG++ condition, worth checking out the instrumental flip too 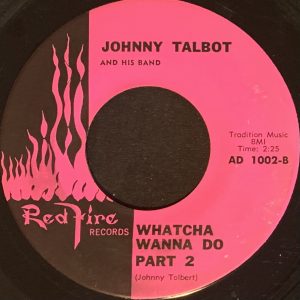