Kipling Taquana Anderson was born on January 24th, 1938. In 1959, Anderson’s debut single, “I Wanna Be the Only One”, was released by “Vee Jay” records, for his follow up release, “Oh My Linda”, he was accompanied by the guitarist Mickey Baker. Lack of commercial gains from recording led Anderson to find work as a disc jockey. Kip then recorded for “Everlast” records, “Tomorrow” records, then in 1967, Anderson released “A Knife and a Fork” for “Checker” records, before recording for “Excello” records. He continued to record and perform in the 1970s, but a ten-year prison sentence in 1974 for possession of heroin halted his activities. Upon his release from prison, Anderson recorded a gospel album, before issuing more soul-based music for “Ichiban” records. Kip Anderson sadly died on August 29th, 2007. This disc from 1964 has some light wear to the label, superficial scuffs to the vinyl whilst retaining some gloss, conservativey graded in VG+ conditon, worth checking out the “Bluesy” flip too 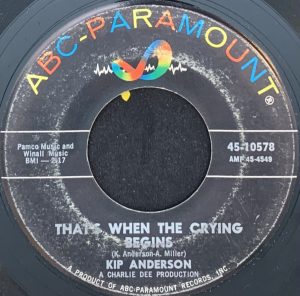 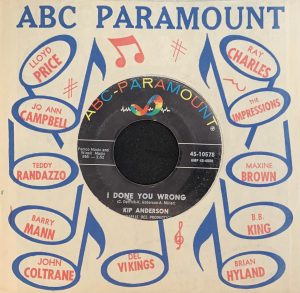