Launched by the Otto Heineman Phonograph Supply Co. in 1918, Okeh records were initially produced as 10″ vertical-cut discs bearing dark blue labels with an Indian head trademark. On October 1, 1919, the Heineman Corporation reorganized as the General Phonograph Corporation and vertical-cut discs were replaced with standard lateral-cut records. The Indian head label was replaced with a script trademark in 1920. Okeh released the first authentic vocal blues recording in November 1920 and became a leading producer of blues and rural American music during the 1920s. The Okeh label was sold to Columbia Phonograph Company, Inc. in 1926, and came under control of the newly formed Okeh Phonograph Corporation. It operated more-or-less independently into the 1930s, maintaining its own studios, master numbering system, and artist and repertoire departments. Discontinued in 1935, it was revived in 1940 and discontinued again in 1946. In 1951 it was officially relaunched. Epic Records took over management of Okeh in 1965. Formed in 1961 in Chicago, IL, this group comprised Viola Floyd, Vera Regulus Wallace, Kathleen Spates Robinson and Theresa Legg. The previously recorded as The Trinkets and The Versatones before recording this tune in 1968 as The Little Foxes. This disc is in EXCELLENT condition, worth checking out the flip “So Glad Your Love Don’t Change” 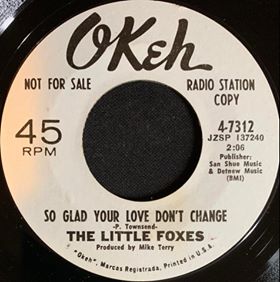 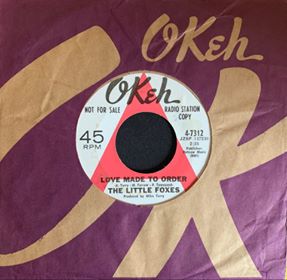