Richard Wayne Penniman was born on December 5th, 1932 in Macon, Georgia. As a teenager, he left home to perform in shows and nightclubs, where he took the name “Little Richard,” achieving notoriety for high-energy onstage antics. His first recordings in the early 1950s, produced in the soothing jump-blues style of Roy Brown. His breakthrough came in September 1955 at a recording session in New Orleans, Louisiana, where Little Richard, recorded “Tutti Frutti.” In the year and a half that followed, he released a string of hits on “Speciality” records. At the very peak of his fame, however, he concluded that rock and roll was the Devil’s work. He abandoned the music business, enrolled in Bible college, and became a traveling Evangelical preacher. When The Beatles skyrocketed onto the music scene in 1964, they sang several of his classic songs and openly acknowledged their debt to their great forebear. This renewed attention inspired Little Richard to return to the stage and the recording studio for another shot at stardom. Little Richard continued to appear at concerts and festivals until 2013, when he announced his retirement. Little Richard sadly died on May 9th, 2020 in Tullahoma, Tennessee. This disc from 1966 has wear to the label and vinyl, whilst retaining some gloss, with a a feelable 1/2 cm scratch at the beginning of the flip, which causes a couple of feint clicks at the beginning of that side. On the top side, there is a “skip” for the first note that is almost unnoticeable, but you need to be aware of. The disc is conservatively graded in VG condition, worth checking the equally great flip too 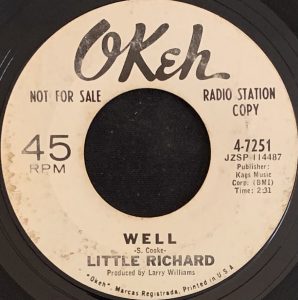