Major Lance – You Belong To Me My Love – Okeh

Major Lance was born on April 4th, 1939 in Washington County, Mississippi, but moved as a child with his family to Chicago. Lance and Otis Leavill formed a group named the Floats in the mid 1950s but broke up before recording any material. Lance became a featured dancer on a local television show, Time for Teens, and presenter Jim Lounsbury gave him a one-off record deal with “Mercury” records in 1959. In 1962 he signed with “Okeh” records where he released a pile of singles and albums. Lance left “Okeh” records in 1968 and moved to “Dakar” records, then moved to Curtis Mayfield’s “Curtom” records, leaving there in 1971 for “Volt” records and “Columbia” records. In 1972, he relocated to England to capitalize on the success of his older records among fans of Northern Soul music and while here, he recorded an album, “Major Lance’s Greatest Hits Recorded Live at the Torch”.
Lance returned to Atlanta in 1974 and signed for “Playboy” records, then set up “Osiris” records, then briefly recorded for “Motown” records, then finally for “Kat Family” records. Major Lance sadly died on  September 3rd, 1994. His daughter, Keisha Lance Bottoms, is the current mayor of Atlanta. This disc from 1965 has light wear, conservatively graded in VG++ condition, worth checking out the flip too!! 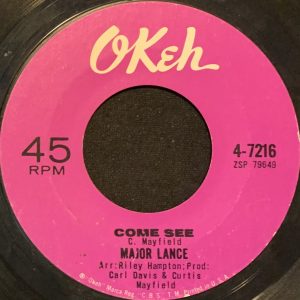