Masqueraders – The Grass Is Green – AGP

The Masqueraders comprised Lee Hatim, Robert Wrights II, David Sanders, Harold Thomas and Sam Hutchins and were formed in Dallas, Texas, making their recorded debut under that name with 1963’s “A Man’s Temptation.” After cutting 1965’s “Talk About a Woman” for the Houston label Soultown, the Masqueraders traveled to Detroit to audition for Motown — informed that their style and approach were too similar to that of the Temptations, the group found themselves stuck in the Motor City with no money to return home, hatching a plan to perform at the local Twenty Grand Club to earn enough cash for return fare.
En route they stumbled on a recording studio owned by La Beat label owner Lou Beatty, who would go on to release five Masqueraders singles between 1966 and 1967. Next the Masqueraders next travelled to Memphis to audition for producer Chips Moman, where they recorded eight singles. The Masqueraders left Memphis and returned to Dallas, establishing their own Stairway label to release two singles in 1971 and 1972, then in 1973 the group returned to Memphis, this time landing with Willie Mitchell’s Hi label. After two singles
they signed with Isaac Hayes’ HBS label in 1975,releasing their first album, then HBS declared bankruptcy and the Masqueraders spent the rest of the decade without a recording contract, then signed with the Atlanta-based Bang label in 1980. This disc from 1968 has light wear,  a “drill hole”, a bit of marker on the label and someone has written their name in the deadwax, otherwise conservatively graded in VG++ condition, worth checking the flip too 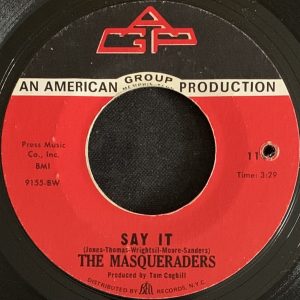