What can you say about Ronnie Walker that hasn’t already been said? Instantly and uniquely recognisable, he’s written some lovely songs over the years without ever having had a hit in the UK although he’s been in the charts as writer of Carol Williams “Love Is You” which was heavily sampled on Spiller’s Groovejet – and that went to number 1.
Ronnie’s gentle personality is reflected in his songs: check out his 2011 recording of” I Will Follow You” on Centre City records – for me it’s one of those hold your breath tracks.
So onto the two sides of this 45. Both were unreleased at the time – “Poor Boy”, written by Ivy Hunter and Stevie Wonder is best known via the Miracles version on the “Away We A Go Go” album from 1966, and for the rarer Soul crowd via Gil Bernal and his slightly MOR version on an RCA 45.
Ronnie’s 1973 take on the song is drenched with all the tricks Philly could bring out of the box at the time and it’s gorgeous.
“Now I Cry” is a Ronnie original from 1967 which also remained in the vaults until a CD comp at the turn of the century. It’s a cool Northern Soul dancer great enough to grace any decent dancefloor.
These two are really welcome on 45, once again a limited edition (which had sold out at the time of writing) and congratulations to Mark Anderson and Des Parker for getting them out there on this truly lovely 45.
Credit – Manifesto Soul March 2019 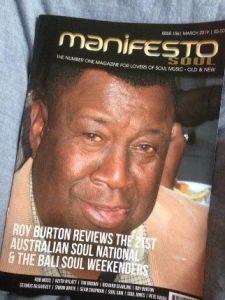