I’ve got the feelin’ 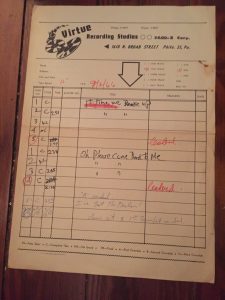 Here we go with release number 7, originally recorded at the Virtue studio in Philly in 1966. Two slabs of soul one a vocal and the other a bass driven instrumental, with soaring brass.

Anthony Alvon is none other than Tony Alvon of Belaires fame. This track was re-recorded and produced in 1967 for the Detroit Palmer label. Here for the first time ever is the original recording backed with a previously unknown instrumental named “Tony’s Groove”. Take a look at the original Virtue sound engineer note page found in the master tape box.

The top side is a fabulous funky mid sixties dancer, with great brass and a honking sax, listen carefully and you will hear the band calling to each other in the background.

Flip it over and let the instrumental wash over you. Tony’s Groove lets the quality of the band shone through, tight brass work behind the driving bass makes this a superb track in its own right.

So now you’ve read this, hit the play buttons below and step back in time to the recording studio at Virtue in 1966 .

Don’t forget this one is limited to 300 copies only and don’t forget to have a listen to number 8.