“U.S.A.” records from Chicago was active in the 1960’s and 1970’s, but was initially based in Milwaukee in 1959 and used a 1200 series until 1961 when the move to Chicago was completed. Joseph Young Jr was born on September 23rd, 1927 in Shreveport, Louisiana, moving to Milwaukee in about 1945, beginning his career in the early 1950’s, taking the name Mighty Joe Young and making his recording debut for Louisiana’s “Jiffy” records in 1955. He moved to Chicago, recording for a succession of labels, including “Fire” records, “Webcor” records, “Celtex” records and “Jacklyn” records, whilst performing live through the decades. Mighty Joe Young sadly died on March 24th, 1999. This disc from 1966 has some superficial wear to the topside with a “drill hole” conservatively graded in VG+ condition, whislt the flip has a couple of feelable marks, giving that side a conservative VG grade 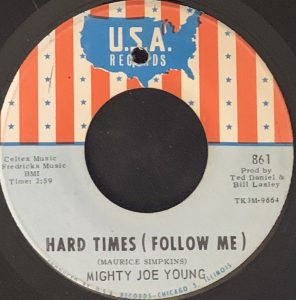