“Celtex” records and “O Pex” records were operated by Bill Lasley in Chicago and put records out in the 1960’s and 1970’s. Joseph Young Jr was born on September 23rd, 1927 in Shreveport, Louisiana, moving to Milwaukee in about 1945, beginning his career in the early 1950’s, taking the name Mighty Joe Young and making his recording debut for Louisiana’s “Jiffy” records in 1955. He moved to Chicago, recording for a succession of labels, including “Fire” records, “Webcor” records, “Celtex” records and “Jacklyn” records, whilst performing live through the decades. Mighty Joe Young sadly died on March 24th, 1999. This disc suffers from slight “dishing” otherwise is in EXCELLENT condition, worth checking the flip too 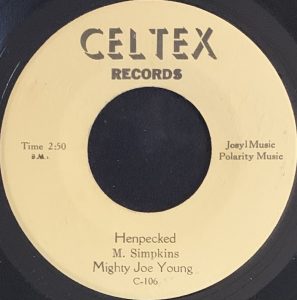