Miriah Avila was raised in La Puente California, started singing at the age of 6. Her inspiration to sing came from her mother and grandmother.  Miriah’s mother Ann, would take Miriah to sing and perform at local church festivals, TV shows, car shows and singing competitions. Miriah’s favorite spot to perform was at the San Pedro fish market. She would perform there during the weekends and sing Mariachi and Ranchera music. At the age of 12, Miriah found interest in singing oldies and English music. In 2011 Miriah decided to further her craft of singing and attended Citrus college. During her time at Citrus, she had the opportunity to tour with the pop band Hawaii. In 2013 Miriah became a first-time mother by giving birth to her son Josiah. Miriah embarked on this new chapter in her life and decided to take a break from her passion, Music… In 2015 after taking a 2-year break, Miriah joined the band Suave. During her four years with Suave, Miriah was able build a strong relationship with the band at which she learned to further her entertainment and singing skills. In 2019 Miriah was signed to Industry Music Group. In July 2019 Miriah’s first single and Vevo video “Hypnotized” was released. In October 2019 Miriah first full Album “You In Love Again” was released and is currently one of the highest played albums on You Tube. Miriah’s passion for music is felt through her songs and musical performances. Miriah has a positive outlook in life and feels blessed being able to do what she loves, Music… 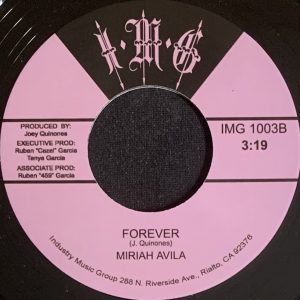