Off Beats – Have Love Will Travel – Guyden

“Guyden” records was founded in Philadelphia in 1952, with Bob Cordell as General Manager, it’s first address being 2250 Bryn Mawr Avenue in Philadelphia, then moving in 1954 to 1314 S. Howard St, and then in June to 1334 Lincoln/Liberty Building, both in Philadelphia. It was bought by Harold Lipsius, and by 1959 was at 1330 W. Girard Avenue in Philadelphia, as part of “Jamie/Guyden” records, which then moved to 919 Broad Street in Philadelphia. Arthur Lee Maye was born on 11th December, 1934 in Tuscaloosa, Alabama and became one of the finest tenors in the Los Angeles “Doo Wop” scene and a major league baseballer. He was considered to be one of the finest tenors from the Los Angeles doo-wop scene. He was involved in quite a few groups, including The Off Beats. Arthur Lee Maye sadly died on 17th July 2002 in Riverside, California. This disc from 1964 has suerficial wear to the label and vinyl, with a feint red cross on the label, conservatively graded in VG+ condition, worth checking the flip too 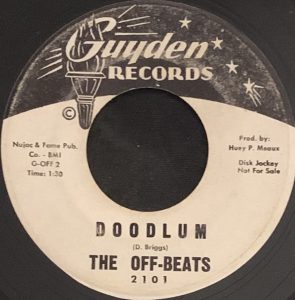