Patrice Holloway – Stay With Your Own Kind – Capitol

Patrice Yvonne Holloway was born in 1948 in Los Angeles, California, the younger sister of Brenda Holloway and enjoyed her greatest commercial success in anonymity, contributing the singing voice of Valerie Brown to the classic Hanna Barbara cartoon series “Josie & the Pussycats”. At age 12, she recorded “Do the Dell-Viking,” for “Taste” records. In collaboration with cousin Patty Hunt, they recorded as The Four J’s and The Belles, featuring Patrice on lead vocals. After Brenda signed to Motown in 1964 and shad a hit with “Every Little Bit Hurts,” Patrice was invited to join the label as well — her tribute single “Stevie” appeared on Motown’s “V.I.P.” records, but subsequent sessions were shelved and the label terminated her contract in late 1965. She signed to “Capitol” records in 1966 and released a few singles, and recording as a session singer. Patrice sadly died on October 2nd, 2006. This disc has light wear on the top side, conservatively graded in VG++ condition, but with a feelable scratch on the flip that plays through ok, but has slight noise 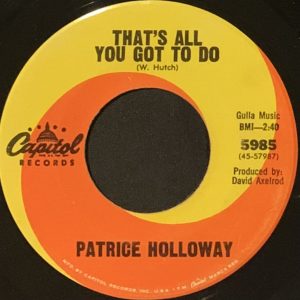