Patti Labelle – Trustin’ In You – Atlantic

Patricia Louise Holte was born on May 24th, 1944 in Philadelphia, Pennsylvania. When Patti was sixteen, she won a talent competition, leading to her first singing group, The Ordettes, in 1960, with Jean Brown, Yvonne Hogen and Johnnie Dawson. In 1962, the Ordettes included three new members, Cindy Birdsong, Sarah Dash and Nona Hendryx and became Patti Labelle And The Bluebelles, recording for “Newtown” records, which later was distributed by “Cameo Parkway” records. In 1965, after the label folded, the group moved to New York and signed with “Atlantic” records, . but in 1967, Birdsong left the group to join The Supremes and by 1970 the group had left the label. Changing their name to “Labelle” they signed with “Warner Brothers” records, then signed with “Epic” records in 1974, signing a solo contract with “Epic” records in 1977, then moving to “Philadelphia International” records, then to “MCA” records, on to “Def Jam” records. This disc from 1970 has a “drill hole” and light wear, whilst retaining gloss, conservatively graded in VG++ condition, worth checking the flip too 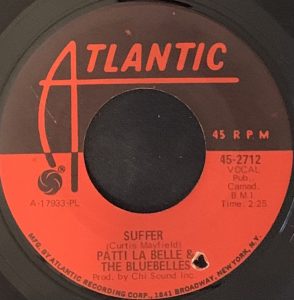