Pentagons – Until Then – Jamie

The Pentagons are remembered for two 1961 hits, “To Be Loved (Forever)” which peaked at number 48 nationally — and “I Wonder.” The original lineup was formed in San Bernadino, California in 1958 comprising Joe Jones, Carl McGinnis, Bill James, Otis Munson, with brothers Kenneth Goodloe and Ted Goodloe and formed in 1958. Sometime during this early period, Munson left and James was later replaced by Odie Jones, Joe’s brother, making for two sets of brothers in the Pentagons’ lineup. They recorded for a few labels, releasing their final single on “Jamie” records in 1961, disbanding not long after. This disc is in EXCELLENT condition, worth checking out the flip 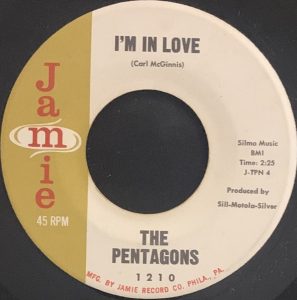