“Dynovoice” records was founded in 1965 by Bob Crewe and his brother Dan, originally as “Dynovox” records, with it’s subsidiary ” New Voice” records. The label was first distributed by “Bell” records, then by “Dot” records until 1969 when it was merged into the Crewe Group Of Companies (CGC) label. The Poets was a group from Glasgow, originally comprising George Gallacher, Hume Paton, Tony Myles, John Dawson and Alan Weir and were active from the mid to late 1960’s.  This disc from 1964 has superficial scuffs, whilst retaining gloss, worth checking the flip too 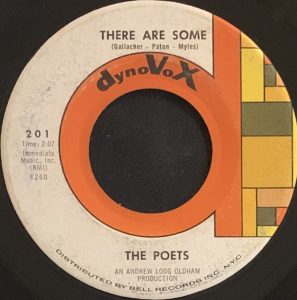