Precisions – What I Want – Drew

The Precisions comprised Arthur Ashford, Michael Morgan, William Rodney Prince, Dennis Gilmore, and Robert Lowe. Billy Brooks was also around and may have blended with them on their recordings on “D-Town” records and “Drew” records at some point. This Detroit group had a recording career that spread over at least nine different labels. Beset by personnel changes, the Precisions dropped singles on “Strand” records, “Golden Crest” records, “Highland” records, and “Debra” records from 1960 to 1963. They achieved some regional success on two singles on “D Town” records but enjoyed their most success on “Drew” records when Martin Coleman, Michael Valvano, and Charles “Cholly” Bassoline wrote “If This Is Love (Than I’d Rather Be Lonely),” which did well on both the R&B and pop charts. It got them television appearances like Ken Hawkins World of Soul in Cleveland, DJ Hops, and better-paying gigs. The members wrote their fourth Drew single, “Instant Heartbreak (Just Add Tears),” which charted, but not as high as expected. The Drew story ends with “Never Let Her Go,” but with no promotion it didn’t have a chance and “Drew” records folded. This disc has superficial scuffs, conservatively graded in VG+ condition, worth checking the equally great flip too 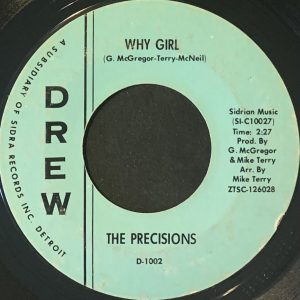