Roscoe Robinson – What Makes A Man Do Wrong – Tuff

Roscoe Robinson was born in Arkansas, then moved to Gary, Indiana and in 1942 was singing lead in the “Five Trumpets” and in subsequent years, he jumped from quartet to quartet including the “Highway QC’s” with Sam Cooke and the “Kelly Brothers” amongst others and in 1960 joined the “Blind Boys of Mississippi” before forming his own group, the “Blind Boys Of Ohio”, before starting his solo career later that year, releasing “What Makes a Man Do Wrong” on the Chess subsidiary “Tuff” records. A year later he wrote, recorded, and released his first million-seller “That’s Enough”. The single was released on his Chicago based “Gerri” records and received considerable radio play, leading to a contract with “Wand” records. Two years later, after a couple more releases, he signed with “Sound Stage Seven” records and released five singles. Roscoe signed with “Atlantic” records in 1969, released 1 record then returned to Alabama and became a “free agent”, producing and writing for various artists and labels throughout the state, including the resurrection of “Gerri” records. During that time he also cut a one-off single with Rick Hall for Fame and later signed with the Paula label in 1971 and was reunited with longtime Chicago friend, Cash McCall, who produced a string of six singles by Roscoe. This disc from 1965 is in EXCELLENT condition, worth checking out the soulful flip too!! 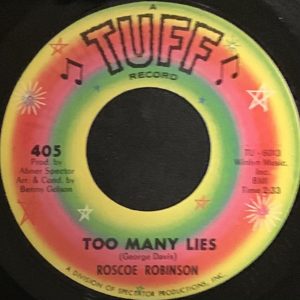