Skyliners – Everything Is Fine – Jubilee

The Skyliners were from Pittsburgh and originally comprised Jimmy Beaumont, Janet Vogel, Wally Lester, Jackie Taylor and Joe Verscharen. They were best known for their 1958 hit, “Since I Don’t Have You”, also doing well with “This I Swear”, “Pennies from Heaven”, “It Happened Today”, “Close Your Eyes”  and “Comes Love”. The group dissolved in 1963, but re-united eleven years later without Jackie Taylor. In 1965, Jimmy Beaumont recorded two singles for “Bang” records. Jackie Taylor was drafted in 1965. In 1975 Wally Lester and Joe Versharen left the group and were replaced by Jimmie Ross and Bob Sholes. Janet Vogel also recorded as Janet Deane, but sadly committed suicide in 1980, replaced by Cathy Cooper. Jimmy Beaumont sadly died in McKeesport, Pennsylvania on October 7th, 2017 and
until his death, performed with the Skyliners in the current line-up of Nick Pociask, Frank Czuri, John Sarkis, and Donna Groom, whose husband, Mark Groom, has been the group’s drummer/conductor for more than 25 years. This disc from 1965 has light wear to the vinyl, conservatively graded in VG++ condition, worth checking the flip 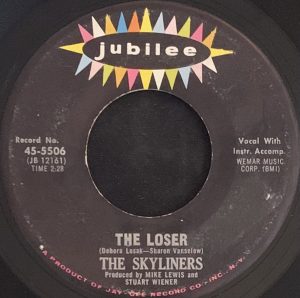