The Sweet inspirations were a female vocal group, formed 1967 in New York, New York. Already a group of session backing vocalists for years, they only formally became a band when they started recording singles in 1967. The original line-up comprised of group leader Emily “Cissy” Houston, Sylvia Shemwell, Myrna Smith and Estelle Brown.
Perhaps even more successful than with their own releases, they were as backing vocalists for Elvis Presley, from 1968 up to his death in 1977, Aretha Franklin, Wilson Pickett, Herbie Mann, Nina Simone, Solomon Burke, and Chuck Jackson.  Cissy Houston left in 1969 to be replaced by Ann Williams who only recorded on 1970’s Sweet, Sweet Soul album. In 1979 Estelle quit the group and was replaced by Gloria Brown and Pat Terry. The group then disbanded after recording one last album, Hot Butterfly.
Sylvia Shemwell, Myrna Smith and Estelle Brown reunited in 1994, now with Portia Griffin as a new member. They have remained active until today. Sylvia Shemwell ceased performing after she suffered a stroke in 2001, and she died in Los Angeles on February 13th 2010. Myrna Smith was hospitalised for pneumonia and kidney failure during 2010, passing away on 24th December 2010 in Canoga Park, California. This disc from 1969 has a “drill hole” otherwise is in EXCELLENT condition, worth checking the flip too 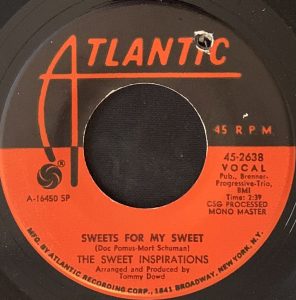