Theodore Taylor was born on February 16th, 1934 in Okmulgee, Oklahoma, moving to California in 1952. After singing and recording with some Gospel groups, he cut his first couple of singles on “Melotone” records in 1957. Over the next seven years, he recorded for a succession of labels including “Ebb” records, “Duke” records, “Top Rank” records, “Gold Eagle” records, “Soncraft” records, “Warwick” records, “Apt” records and “Laurie” records (where several of his records were credited to Austin Taylor) He did not achieve national commercial success until his 1965 recording on “Okeh” records. After further singles on “Okeh” records, “Epic” records, “Atco” records and “Jewel” records, he signed to “Ronn” records in 1967, remaining on the label for seven years, moving to “Alarm” records, then recording on his own “Solpugids” label and “SPG” label until he sadly died in a car crash in Lake Charles, Louisiana on October 23rd, 1987. This disc from 1962 has light wear, conservatively graded in VG++ condition, worth checking out the flip too!! 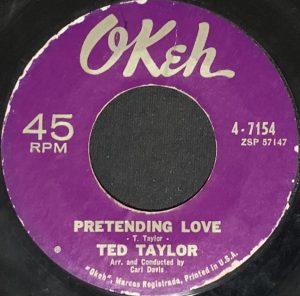