This famous group was known for their success with Motown Records during the 1960s and 1970s. With their distinct harmonies, choreography, & flashy wardrobe, the group was highly influential in the evolution of R&B and soul music. Formed in 1960 in Detroit, Michigan under the name The Elgins, not to be confused with the other Motown group with the same name, they changed their name to The Temptations before being signed at Motown in 1962. Over the period of 50 years, members have included Otis Williams, Elbridge “Al” Bryant, Melvin Franklin, Eddie Kendricks, Paul Williams, David Ruffin, Dennis Edwards, Ricky Owens, Richard Street, Damon Harris, Glenn Leonard, Louis Price, Ron Tyson, Ali-Ollie Woodson, Theo Peoples, Ray Davis, Harry McGilberry, Barrington “Bo” Henderson, Terry Weeks, G.C. Cameron, Joe Herndon, Bruce Williamson, Larry Braggs and Willie Green. This great, powerful, recommended track from 1980 comes on red vinyl and is in EXCELLENT condition!! 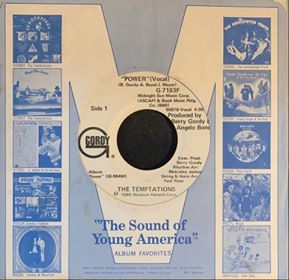