At the age 21 in 1964, Terry  Lee became one of Pittsburgh’s top radio DJs  through to the mid 1970’s.  Around 1965 Terry Lee made after hours use of the studio to produce and engineer garage band records with his own record labels “Sherry” records and “Stone” records. Terry managed local bands, hosted his own local TV show, staging local events, releasing some records under his own name and even owning his own night club. Staying in radio, Terry moved to Phoenix, Arizona in 1988, then Florida in 1990, Mansfield, Ohio in 1992 before retiring in 1998. He came out of retirement briefly in 2008 in his Pittsburgh home town and sadly died on July 30th, 2013. This disc from 1964 has superficial wear, whilst retaining a little gloss, conservatively graded in VG- condition, worth checking the flip too 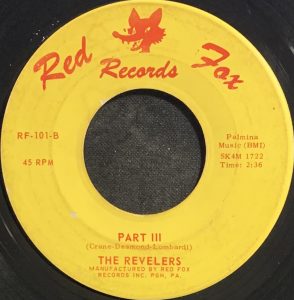