Terence James ‘Terry’ Reid was born on 13th November 1949 in Huntingdon, England. After leaving school at the age of 15 Reid joined Peter Jay’s Jaywalkers after being spotted by the band’s drummer, Peter Jay. His public profile was enhanced in 1966 when The Jaywalkers were named as a support act for The Rolling Stones for their 23-show Tour of Britain in September and October of 1966. At the concert at the Royal Albert Hall, Graham Nash of The Hollies became friends with Reid and suggested The Jaywalkers sign up with UK Columbia Records—an EMI label—to record with producer John Burgess. Their first single, the soul-inspired “The Hand Don’t Fit the Glove” was a minor hit in 1967, but by then The Jaywalkers had decided to disband.
Reid came to the attention of producer Mickie Most, who became his manager and who was in partnership with Peter Grant at the time. His first single with Most, “Better By Far”, became a radio favourite, but the album, Bang Bang, You’re Terry Reid, was not a commercial success. Reid continued to record and support up until the present. This FANTASTIC tune from 1969 is in EXCELLENT condition!!!! 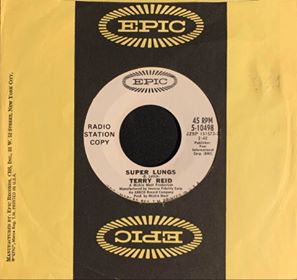